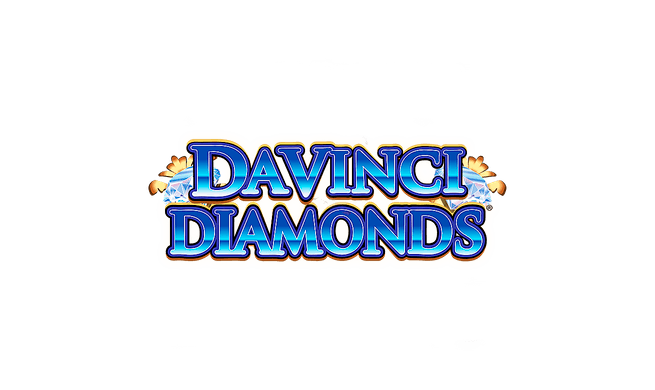 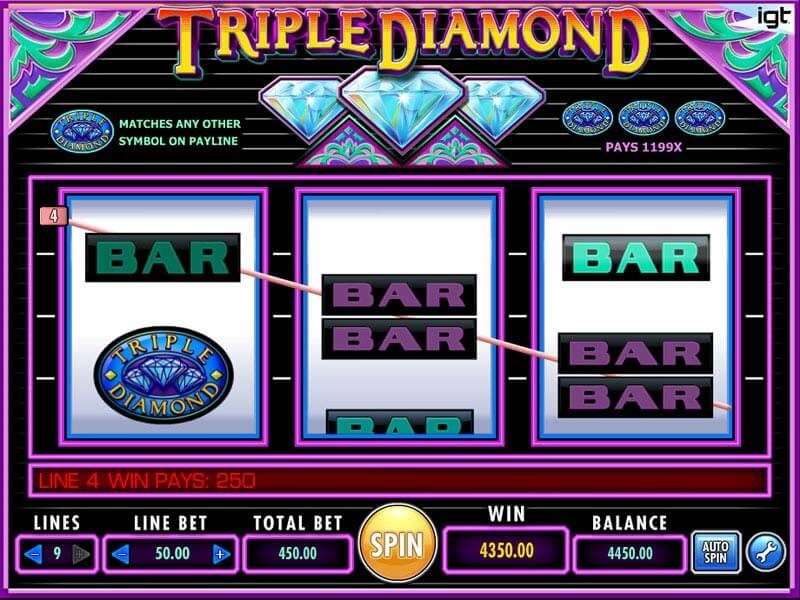 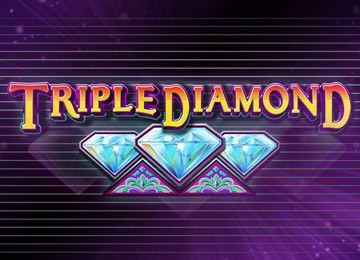 In the race of developing modern video slots with all sorts of complex bonus features and video game-like graphics, some software providers forgot where everything started and what makes slot machines so enjoyable. Triple Diamond slot aims to remind players how enjoyable and rewarding a classic slot can be. And even though some casino players may not agree with the fact that a classic slot can be enjoyable, the ones that had the pleasure of playing these gems back when they were mechanical, will surely feel a bit melancholic.

So, we put together a review for Triple Diamond to allow all casino players to discover this classic slots. It’s an opportunity for players that are more into the modern video slots to understand the advantages that a seemingly-boring online slot can bring. 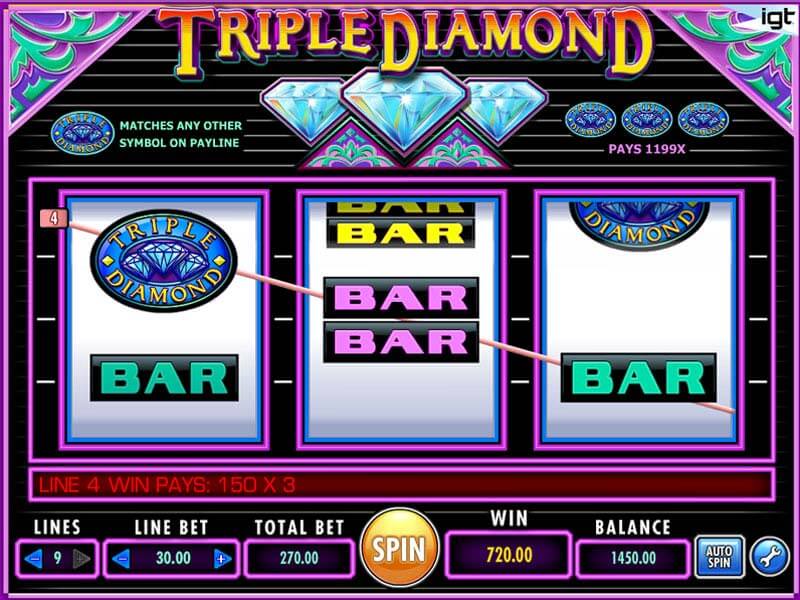 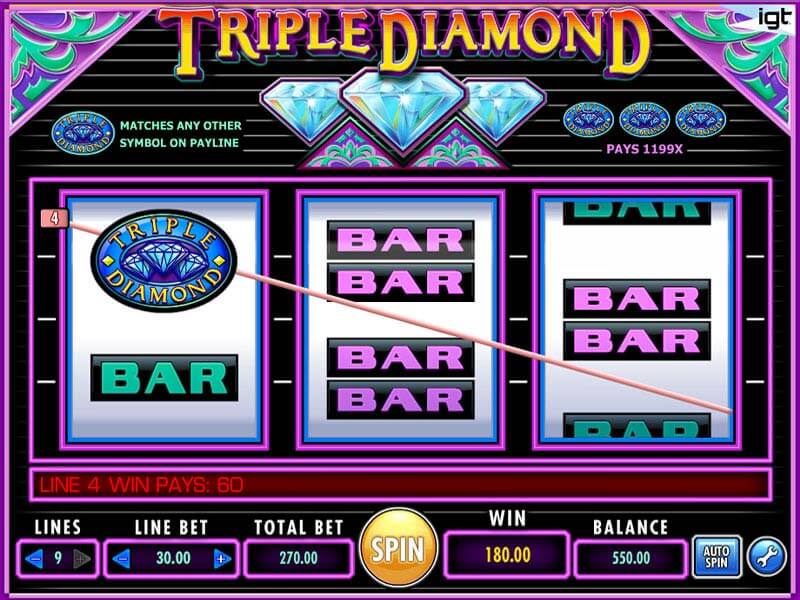 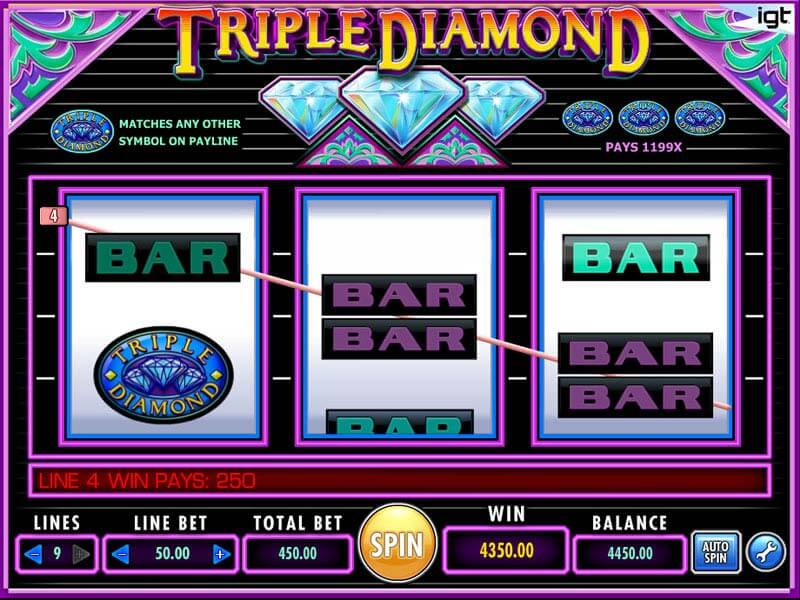 Developed by IGT, this online slot has plenty to offer. So, don’t get fooled by the fact it only offers three reels and a limited number of symbols. The Triple Diamond review, we’ve prepared will uncover all the winning potential that’s hidden int this casino game. Let’s get the review started with some general information about the classic online slot. 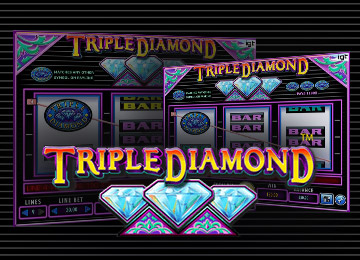 Triple Diamond offers three reels and nine paylines so that players form winning combinations. The layout of the casino games is familiar to those that ever stepped inside a Las Vegas casino in the 90s. However, unlike the classic slot machines in brick and mortar casinos, Triple Diamond gives you the option to change the number of paylines you play. You can pick any number between 1 and 9, which makes the game a lot more flexible and allows players of all types to enjoy an amazing experience. The line bet can also be modified so that you get the perfect bet for the balance you have available. Don’t worry about the maximum bet is too high, this online slot is perfect for high rollers and casual players alike.

The RTP for the Triple Diamond slot is very close to the casino average of 97%, which means you’re in for some exciting wins when playing this title. Set at 96,5% by independent companies that are there to verify the fairness of games, the Return to Player of this IGT slot is definitely one more reason why you should give it a go even if you’re more into the video slots with dozens of bonus features.

Being a classic slot, there’s not much to talk about graphics in Triple Diamond. Sure, the game does look a lot better than the first online slot machines that looked as if they were drawn on a piece of paper. However, IGT could not have used more advanced graphics or animations because that would have ruined the whole classic theme. The three reels are neatly designed with the symbols sharply created, but that’s about it.

When you play Triple Diamond slot, and you’re already aware you’re going for a classic casino game, you should know not to expect amazing sound effects either. Even though some casino players may think the developers just got lazy and decided not to create a soundtrack for this game, that’s just the way slots were back in the day. And, believe it or not, there are a lot of people that would love nothing more than to experience a genuine classic slot. So, you’re getting a retro sound each time you spin the reels and a buzzer that lets you know you just landed a winning combination. And that’s about it in terms of audio effects and sounds.

So, you know that you have three reels and nine paylines to enjoy in the Triple Diamond slot game. Both the paylines and the line bet can be modified so that you find the best approach to give you more winning chances. If with the paylines the choice is pretty simple, having to choose any number from 1 to 9, the line bet value has more choices for you:

Just like many more IGT slots, even this classic one allows you to sit back and enjoy the wins without having to press the spin button time and time again. The Auto Play feature is designed so that you fully enjoy the gambling experience. You can choose the number Auto Spins then the slot spins the reels for the selected number of times, and since there are no bonus features, it won’t stop along the way.

For all the slot players out there that were getting tired of the playing card symbols present in most of the video slots, we have some good news! The playing card numbers have disappeared. You probably expected that from a classic slot. Instead, you will get to enjoy some of the first symbols to appear on slot reels.

First of all, you have the ANY BAR symbol, which is the lowest paying of the game. However, unlike the other slots, even the lowest payout is still five times the initial stake. Then, you have the BAR symbol, which is ten times your initial bet, the double BAR symbol which rewards you with 20 times the stake, and the triple BAR that is worth 40 times your bet. You need at least three such symbols to get a payout, anything less than three symbols on an active payline won’t generate a win. The list of symbols goes on with one of the most used and popular symbols of all time – the red 7. Not only that, this is a symbol of classic slots, but it has even generated a slot type of its own. So, it’s no wonder that such a respectable symbol is worth 100 times your initial stake, and it goes without saying that landing three of these symbols is going to change the way you look at classic slots.

Last but definitely not least, the Triple Diamond slot logo serves as the highest-paying symbol. By landing three of these symbols, you’re going to win a life-changing 1199 times the bet you placed to spin the reels. That’s an amazing amount to win without a bonus feature or a Triple Diamond free spins round. And that’s the appeal of these classic slots, even if you think they have nothing to offer because they lack free spins or extra rounds, you are getting rewarded through base gameplay, which makes them a lot more exciting. The Triple Diamond logo is also special because it gives you a win even if you don’t get three of them on the reels. Two such symbols will still pay ten times the stake, and even one will give you a 2x win. 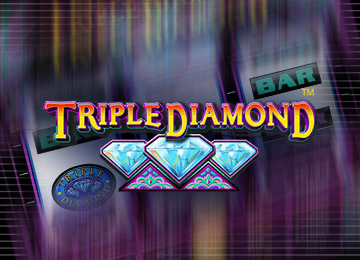 If you think the Triple Diamond logo symbol has revealed all its secrets, you need to think again. This special symbol also serves as the only extra feature that this classic slot machine has to offer. It will match any other symbol on the payline to form winning combinations. Not just that, but it will triple the winning combination it forms, and if you get two such symbols in a winning combination, you get nine times the original value. So, we can say that this symbol has some of the properties shown by a Wild symbol, which is always nice to see even if we’re talking about a free slot.

You may think that simply because this is a classic slot, there’s nothing to learn about it. It’s all on display, three reels, nine paylines, you just have to spin and hope for the best. However, that’s not all there is to it. Admittedly, there are no special features to discover and get accustomed to. However, you should still play this game in practice mode until you fully see all the wins and the way it behaves. This is the only way to understand how to win Triple Diamond rewards. When you get a new car, you won’t even think about taking out your wallet without getting behind the wheel first to see how it drives. Well, that’s what you should do with a new online slot as well. Play it in demo mode on our website so that you gather enough experience so that you will feel the way it goes.

There’s another advantage that comes from playing the game in demo mode before jumping to real money. You get to play with various bet values by changing the paylines and line bet settings. Of course, because the slot is based on a Random Number Generator, this shouldn’t show any differences in the way the game plays. However, you have a chance to see how often a win comes your way so you can have a better chance to increase your bet value before a win so you can take more out of it. Apply these tips no matter if you’re playing on the Triple Diamond mobile app or the desktop version, you will see the results!

Triple Diamond is the perfect example of a classic slot, just a little bit brought into present days by having more than just one payline and that Triple Diamond symbol that acts more or less as a Wild. All in all, it’s the perfect slot for all those players that are melancholic about classic slots, and it’s still appealing enough for the ones that only played complex video slots so far. The bottom line, you have plenty to enjoy if you choose to play Triple Diamond right now!